Editor's Pick: 10 of our Favorite Brewpubs in the U.S.! 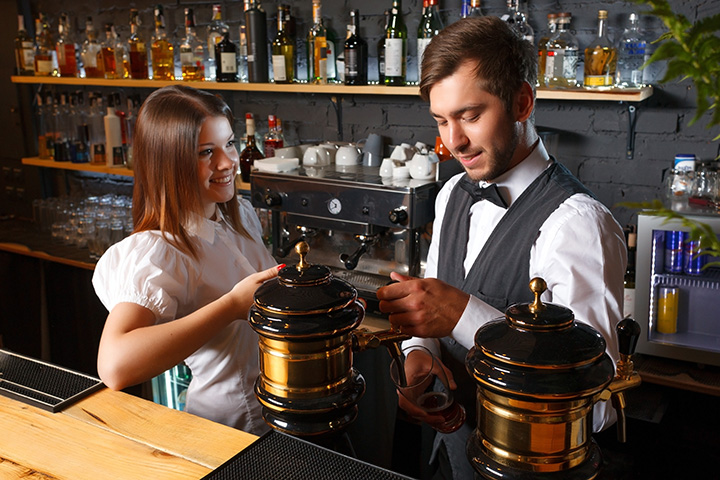 It's the best of both worlds. A local brew in a local pub. The words even go nicely together. A brewpub is defined as selling beer brewed on the premises and often including a restaurant.

Beer wasn't invented so much as it was discovered. Scientists suggest a happy accident of bread left sitting in water gave some thirsty farmer an idea sometime around 10,000 B.C. The earliest process included heating water and barley or wheat to form a syrupy concoction, which turned water not safe to drink into a beverage thought to be therapeutic and known to keep everyone happy during dinner.

The modern microbrew craze has been gradually gaining steam across the United States since the early 80s and now mixologists craft recipes that include local ingredients and pair nicely with food and friends. Sit back and order up a pint of perfection at any of these brewpubs across the country.

Urban Chestnut takes a "new world meets old" approach to brewing, offering both modern American beers as well as "classically crafted, timeless European beer styles." Brewmaster, Florian Kuplent came from Germany with an inherent sense of good beer and he brings his creativity and passion for developing award-winning beer to Urban Chestnut. Feast on snacks, sandwiches and more serious fare from the full menu at the Grove Brewery & Bierhall location or find lighter dishes at their Midtown outpost. In either location applaud their efforts at sustainability and supporting the local nonprofit community.

Don't let the name American Flatbread fool you. They are cooking up more than artisanal flatbreads in the Burlington Hearth. In 2004 they launched the Zero Gravity Brewery, so now you can sample one of their 18 beers on tap while you munch on a flatbread sourced from local ingredients and baked in a "wood-fired, clay-dome oven" they built themselves. Crafty people those bakers and brewers!

The beers on tap at Russian River Brewing Company range from the pale ale to the dark stout with double and triple pale ale in between, some with an alcohol by volume rating of 10%. The variety and quality is thanks to Vinnie Cilurzo, the co-owner and brewmaster who honed his skill over the years working for a world-class brand in a part of the country better known for its wines. Cilurzo and his wife relaunched the Russian River Brewing Company in 2004 as a brewpub and added a production brewery to keep up with demand in 2008. You can find their beer in seven locations across the U.S. or visit their brewpub in Santa Rosa, California to sip their award-winning beer with a selection from the munchies menu that incorporates products from local vendors.

They do things a little differently at Dogfish Head. Their story begins in 1995 with the first brewpub in Delaware that was also the "smallest commercial brewery in America." Today their beer is brewed in a 100,000 square-foot facility that also houses a distillery where they produce their own vodka, rum and gin and their 20 styles of beer are sold in more than 25 states. In their brewpub, they offer a selection of specialty pizzas, seafood and sandwiches and you can enjoy the local food and beer while listening to a local band.

The beer and the menu change with the seasons at 3 Floyds Brewing Co. where they partner with local farms to bring fresh food to their brewpub menu with an inspired selection of snacks, small plates, entrees and sides like braised short ribs or pulled pork mac and cheese. You'll need some beer to wash all that down, so choose from the year-round or seasonal choices or try a barrel-aged brew like Barrel-Aged Black Sun Stout.

The best relationships are made by hand, like malt and barley and making friends on a school bus, which is how the owners of Victory Brewing Company first met. Childhood friends and beer drinking buddies Bill Covaleski and Ron Barchet probably weren't talking about starting a brewery back then, but their longtime friendship helped them bring their idea to life in 1996 and they are now satisfying taste buds in 34 states. The brewing doesn't stop with the beer as they also offer beer-infused small-batch treats, including cheddar spreads and all-natural ice cream!

The inspiration for a new brew can come from "anywhere and everywhere" at the Red Rock Brewery and they don't let themselves get caught up in the traditional unless it's one of their Draft Classics. Their Fine Line beers are "bigger and bolder" and "packaged in a European-style bottle" and their Artist Palette beer celebrates "variety and creativity." Chef's specials and beers on tap change regularly and they even serve a weekend brunch in their downtown eatery.

Beer brewing is part art, part science, part passion and a healthy dose of experimentation. At Allagash, the beer is inspired by the tastes, travels and trials of the founder, Rob Tod who sold his first batch of Allagash White in 1995. All year long they brew Belgian-inspired beers with names like Saison, Tripel and Curieux. Their limited release beers funnel profits into local nonprofits and even the staff in their store is of a philanthropic nature and donates their tips to a local charity.

At Deschutes, they believe good beer brings people together, so they craft their beer with extra TLC to make you want to linger a bit longer. Use the beer finder on their website to determine which brew is right for you, like something warm and spicy for a cold winter's night or crisp and clean like their Twilight Summer Ale. Visit their Bend Public House where their first beers were brewed and order from their menu of "sustainable fare that is locally sourced and house-made."

The core values at Oskar Blues are "craft beer, fresh ingredients, live music and family and friends." Sounds like a winning combination. The first restaurant in Colorado opened in 1997, thanks to the vision of its founder, Dale Katechis whose ingenuity would "spark the craft-beer-in-a-can craze." In 2015 they launched Oskar Blues Fooderies to bring a cohesion to their burgeoning brands, like CHUBurger and CYCLOPS Bike CANtina both in Longmont, Colorado. Visit Oskar Blues Grill & Brew in Lyons, which is home to the brewery and original restaurant with an "Americana-inspired menu, and local and national musical acts."